The town of Pec pod Sněžkou is one of great mountain centres of both winter and summer recreation, thanks to its location among the highest mountains of Krkonoše, beautiful nature sceneries and, last but not least, terrain suitable fort skiing. 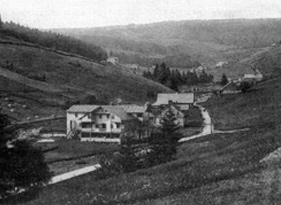 The built-up area is partially dispersed on various mountain slopes, but most of it is concentrated in two valleys. The first of them is the valley of the Úpa river, which ends by the gorgeous Obří důl, a glacier-modelled vale. The other is the valley of Zelený potok (Green Brook).

Pec pod Sněžkou is surrounded by a number of mountains and hills. The wooded Růžová hora (Rosy Mountain, 1300 above sea level) is located to north-east, while a row of the three highest mountains of Krkonoše - Sněžka (1602 above sea level), Studniční hora (Well Mountain, 1554 above sea level) and Luční hora (Meadow Mountain, 1547 above sea level) towers to the north. To the west, the area of the municipality is delimited by Zadní planina (Rear Plateau) and by Liščí hora (Fox Mountain). The slopes of the Javor mountain would almost close the circle, but for the Úpa river, which flows between it and Růžová hora.

A mining hamlet called Obří důl (Giant Mine) was the first settled part of today's Pec pod Sněžkou. The first exact record of mining comes from 1511. Copper ores and arsenopyrite were extracted there above all. Mineral mining in Pec had lasted, with various interruptions, until 1959, when the mining activity stopped altogether after more than 450 years. Pec pod Sněžkou itself came into existence only at the end of the 16th century; it formed the third part of Velká Úpa at that time. Pec was founded thanks to extensive logging for the needs of the Kutná Hora mines. Woodcutters, who had been called to Krkonoše from Styria, Carinthia and Tyrol, founded meadow enclaves in forest clearings, built dwellings (called huts) and bred cattle and goats.

The development of tourism in the second half of the 19th century offered settlers a new source of livelihood. At first, they accommodated tourists in the hay, but later they adapted their dwellings for the possibility of renting rooms, which gave rise to huts, pensions and hotels, as documented by photographs from the turn of the century.